Last time, I started to make my game more unpredictable. To achieve that i created my internal “script language” which is integrated into my editor and allows me to make custom actions. For now I see many uses, for example :

Simply, first in editor I create my level, next i write formula on new script window ( yeah, it will grow to  something like UDK 🙂 ) then I can attach this formula to any object on scene like bottom of switch. After that my chosen object gains new functionality, which is executed every physics update. Especially, typical  trigger checks every update if something collide with it, than if collision occurs, it executes selected action e.g. formula like :

mean,  if something touches the object then reverse motor of object which name is “OBJ1″. Of course OBJ1 must have joint with motor enabled, without that nothing will happen. And one more thing is needed to get it to work – object OBJ1 must exist on scene, so we must choose object and name it:

Of course formulas can be combined to give various effects like:

Switches are made with usage benefits of bullet. Simply capsule-like shape with motor which pushes object in certain direction. Power of motor can be adjusted to the needs. If something is lying on capsule and it’s enough 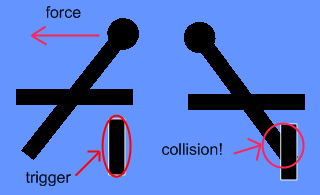 heavy to break power of the motor than it triggers the action. Other type of switch is made with weak motor and it triggers action twice: on collision begin and collision end. The difference of this two switches You can see on video.

Lever is a tricky part.  Every mechanics/logic work beyond eyes of player – lower part of lever  is obscured by non colliding terrain. In fact lever is composed of stick anchored in the middle and the trigger which is waiting for hit. And the only on object which is able to knock it is of course previously mentioned stick.

Especially, trigger doesn’t need to have graphical representation like switch or lever, it can be  also invisible trigger which can create situation like suddenly closed doors after entering new location and played scary sound.